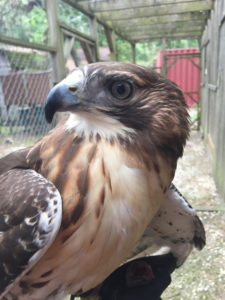 One of the most rewarding behind-the-scenes experiences I’ve had at Cedar Run has been working with a new Red-tailed Hawk Wildlife Ambassador.

Harriet was admitted to the hospital in the summer of 2018 after being hit by a car, and thus sustained some significant damage to her left wing, and costed her one of her toes. The fracture in her wing was originally pinned for healing, but it became apparent that the damage was extensive enough that it limited her mobility, leaving her with a permanent wing droop, and partially flighted.

Before Harriet was formally named, I nicknamed her “Pins” because of the pin that was used to heal her fracture. I realized that she couldn’t be permanently named after her injury, so I looked for a more noble name for her. Thus, I found Harriet Hemenway. 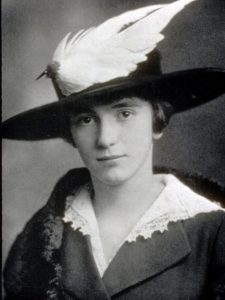 Harriet Hemenway donning a hat with a plume embellishment

Harriet Hemenway was a Boston socialite that founded the Massachusetts Audubon Society after realizing that the plume trade was negatively affecting our wild bird populations. She used her position within the organization to spearhead a piece of legislation that, to this day, protects all migratory birds in the States – the Migratory Bird Treaty Act. This Act prevents the possession of birds in whole or parts, dead or alive – including feathers – in order to protect birds from being hunted for their plumes. It also makes hunting any bird protected under the Act illegal.

Harriet Hemenway was so influential in the environmental world, as well as in the world of birds, and I thought that her tenacity matched the fiery hawk I have been working with.

Working with Harriet has been so rewarding, and so humbling. One step forward, three steps back was not unusual in her road to being a representative for her species. Training does not obey the human’s time schedule – only the bird can tell you when they are ready for the next step. I still remember the first time she let me watch her eat, the first time she footed my glove, and the overwhelming feeling of success the first time she fully stood on my glove. I’ve learned to harness my patience, and accepting that some days will prove very fruitful, and some days we might not accomplish much at all – but either way, it is still up to her how much she wants to participate and I always listen to her limits. I can only guide her to what I want, but ultimately, it’s all up to her. 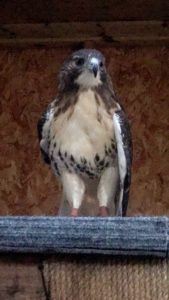 While our training is still in it’s infancy, I am sure of her ability to adapt to changing environments, and I can (usually) count on her to be “excited” (or willing to participate) in our training sessions.

Harriet’s admission story is not unusual by any means. One of the leading causes for birds of prey to be admitted to our hospital is being hit by a car. These injuries range from minor to life threatening, and sometimes leave birds with permanent non-releasable injuries. Harriet arrived as a young juvenile, already skinny from inexperience in hunting, and probably wasn’t doing so well before she was hit. Luckily for her, she never has to worry about food, or cars, again and will stay with Cedar Run to teach tens of thousands of people about the perils of young raptors – less than 25% make it past their first two years – and about the dangers of roadside litter, which may have been why she was hit. But, despite our luxury care, she would still prefer to be wild if she could be.

Roadside litter, unfortunately, is very common. People often don’t consider food items to be “litter” but when they’re thrown on road sides, they become attractants for little critters looking for a snack. Sometimes those animals have to cross the road to get to the food, a very dangerous venture. Often though, those animals are prey to other predators, like birds of prey. These birds have specialized vision to see great distances, but lack peripherals, so they cannot see a car coming when they swoop down to grab a mouse feeding on an apple core on the road side. Red-Tailed Hawks especially have learned that roadsides are often easy places to hunt, and more often than not, it is to their detriment.

Many times, seeing an animal affected by humans impacts people in a great way and encourages them to be better environmental stewards. Harriet is as beautiful as she is captivating, and she will play an enormously important role in conservation by spreading her story of admission, and encouraging people to simply throw trash out at home.

Harriet has been such a pleasure to work with, and I’m so excited to finally share her with the world. 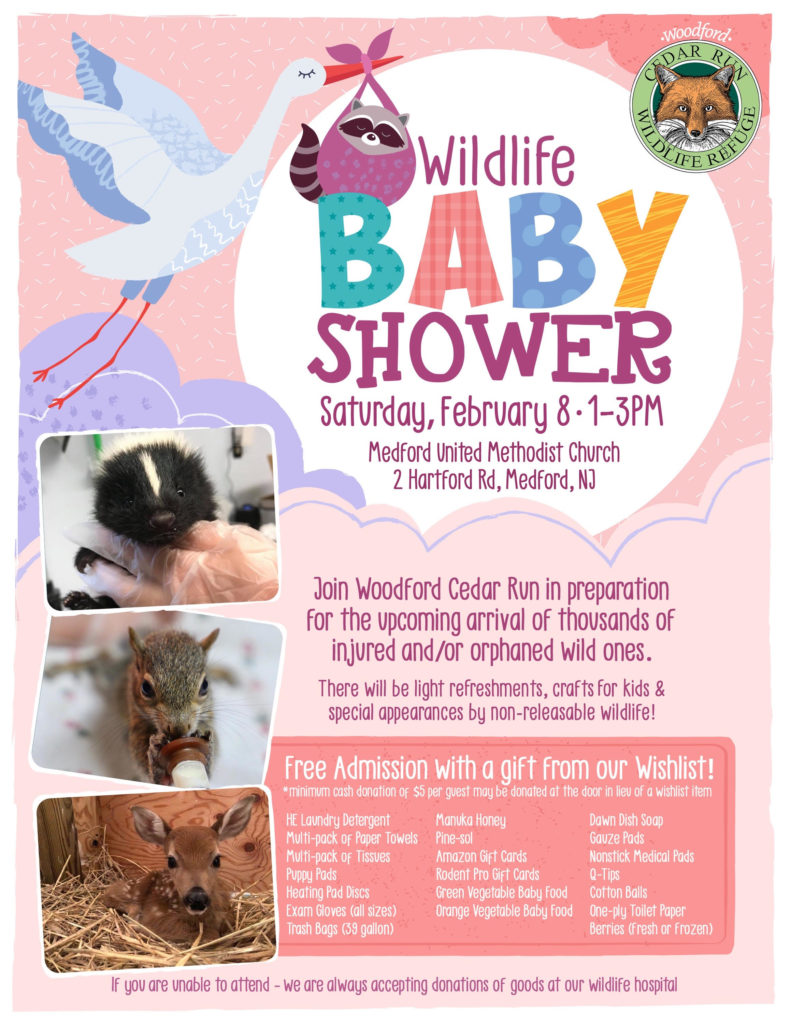 Feb
14
Fri
all-day Valentine’s Day
Valentine’s Day
Feb 14 all-day
Enjoy a special day of programs at Cedar Run. We will present Raptors and Reptiles at 11am and 1pm. All ages welcome. FREE with admission. Children ages 12 and under... More →
View Calendar